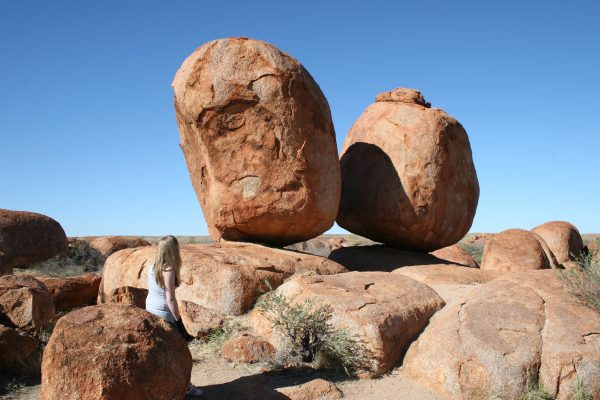 Tennant Creek is a small town situated in a vast expanse of outback.  It literally sits at the edge of the dry, red earth climate of central Australia and the tropical top end of the Northern Territories. Just a few miles south of Tennant Creek (500 kilometers north of Alice Springs, the center; 1000 kilometers south of Darwin on the coast of the top end), the landscape is suddenly different. The termite hills are higher. The air is denser.  Its hotter. And its flat.

I was invited to teach a staff support day here by a friend of a friend, who was also organizing a similar workshop in Alice Springs. I chose to do this workshop over returning to New York City for the annual Dance Movement Therapy Conference at which I was to participate in several significant (and quite possibly “career enhancing”) opportunities.  I debated for a moment, but having been to Uluru twice, I am drawn to the outback…and could not imagine passing up an opportunity to travel to a remote frontier town in the middle of Australia. A few of my Aussie friends made fun at m excitement to see Tennant Creek—it is truly not near anything. I love space and I love going to uncommon places.

The workshop was attendee by government workers, local organizations, Indigenous people and white Australians. I facilitate staff care trainings as a process, vs. handing out the usual lists of to do and not to do. Culture, tradition, belief all become core to this process. When a group is mixed, at both groups were, and especially in a place like Tennant Creek where the original Aboriginal people are still connected to  country here, and who more recently lost it to colonialism and mining, dynamics are potent. There was a clear divide here, and yet all the people in my workshop were working with the indigenous people. One of them was a member of the stolen generation. That legacy is still an overwhelmingly present one.

I fell in love with Tennant Creek. Somewhat like Darwin but in a far less urban way (Darwin has a city downtown), Tennant Creek is a frontier town at the end of (or the middle of) the world. People living and working there have to be committed to the land. Its tough and honest. I slept really deeply to winds that had an echo I’d never heard before—perhaps because they had danced across such a vast open space, city-less and inhabited by a few cattle stations, indigenous communities, and the few Aboriginal people who can still walk their Songlines.

I had a few interesting events in the red center heart of Australia. One participant in two of my workshops came for a meeting to talk about some of the work we did, and as she walked into my room, she flatly said “I have a joey in the bag can I hang it somewhere?” Sort of like “Where can I tie my horse,” I was stunned at first, repeated her words and then wide eyed I’m sure, I said, “YOU HAVE A BABY KANGAROO?!”

Sure enough. She is a wildlife career and was tending to a very young kangaroo whose mom had been killed. I played with her, cuddled her and kissed her little nose and she accepted it without flinching. Australia has a wonderful tradition of wildlife caring; its tragic there are so many animals killed on increasingly busy roads, and, the tiny ones who are rescued from the marsupial pouches are well tended to. Appreciation for the joy of wildlife and the natural world is palpable here.

I spent much of my free day in Alice Springs at the Botanical Gardens, which are stunning. Descriptions won’t do the landscape justice. I’ve heard people “snuff” at the mention of visiting Alice Springs, because there is “nothing there”. I actually appreciate places of nothingness, because there is stillness, and quiet. However, as with most “nothing” places, one only need pause long enough to settle eyes, ears, and all the senses into then landscape (or seascape) and there is a discovery garden right here.

Alice is a place of spaciousness, extraordinary red earth that truly does pulse with a heartbeat from the center of this ancient continent. Amazing, colorful, adorable  wildlife; a chorus of bird songs that permeate the air  with melodies unique to this land and sky; legendary rock mountains whose stories go back 40,000 or more years.  The obvious and ongoing pressures of the colonization of Australia by Europeans are still evident here. The connection between the Indigenous peoples of Australia, and this land, is also palpable; the abject poverty and forced disassociation of many Aborigines from the earth source  of their stories and traditions is painfully clear. This is country for many of Australia’s indigenous, and there is clear disparity between them, and the white settler descendants. Being in Alice is like standing in the heart center and feeling its brokenness all at once.