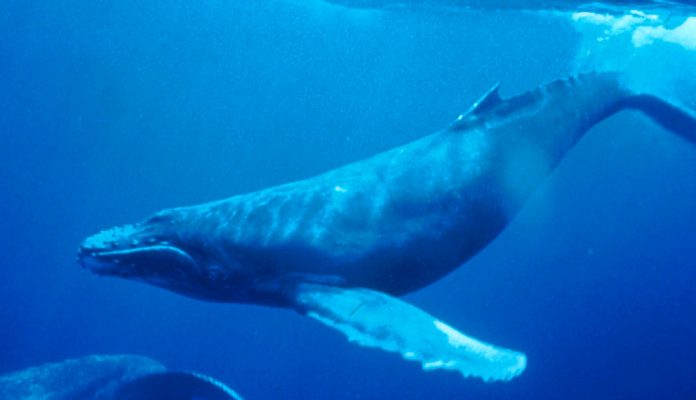 Blog: In The Presence Of Love

This is big ocean.

Whales are everywhere, here: they literally punctuate the ocean with their movements. In the space of a few minutes, looking out over the horizon or around the sea our boat is gliding through, we see pairs and trios and pods of whales breaching, spy-hopping, tail slapping and diving. This is an annual pilgrimage site, for breeding and birthing. These prisms of gem-blue waters serve as a safe place for the whales to create new life and tend to their young before they begin their own journeys back to Antartica.

This is big ocean. Tonga is in the middle of the South Pacific, and there is a lot of water. I am one of those unfortunate people who saw Jaws when it first came out, and am terrified of the deep. Having grown up near the ocean, and once been comfortable swimming long distances in it; I began to fear being out in the deep ocean, after seeing Jaws. Swimming with whales in Tonga—which I really wanted to do—meant I sometimes had to swim in deep ocean.

The trip I joined was also a freediving trip and I made it clear to the instructor that I wasn’t interested in freedivng—only whales. I think I was a little scared. But I had never really thought about it and it just seemed unnecessary: Why would I hold my breath and plunge into that deep? I just wanted to see the whales.

This blog isn’t about the apparent madness of the world right now, but it bears stating that the world seems particularly poised on the edge of many disasters, tragedies, horrors. My Utne reader just arrived with this on the cover: Curtain Call. Its about the end of us. I have believed that my niece and nephews generation may be the ones who see our species die out, for a long time. Its not a popular idea, but as the ice melts, weather destabilizes, refugees die in boats and get turned away from safe shores, fires burn, hunters kill precious beloved lions. ..The list goes on. This is why I went to visit the whales. Before I met them, I hoped they might inherit the world, because I have long believed they are far smarter, and more importantly—more compassionate than we. I think I am right.

Back to the water: In the midst of a crumbling world, my Father’s transition, my own free-float out of structured job and the assurance of steady contract work (i.e I am remaking my professional life), I needed to be in the deep. I visited Tonga in the coldest winter anyone could remember there. What that means is winds of 20-25 knots, rough oceans, cold water. The whales love the cold. I don’t own a wetsuit and have never free-dived and was not prepared for how physically difficult it would be to stay warm and float in this season of unusual weather. But that’s where the whales were.

Its kind of crazy to jump in the water and swim with whales. Whales are big. HUGE . Massive. And yet being in the water with them runs the continuum of deep rest to playful encounter. Whales see us. If they are not interested, they swim away immediately. If they hang out on the surface for a while, they may be beckoning you to join them in their watery home. If you swim to within 30, give or take, meters of them, they may remain floating on the surface or below you. They may get really still. They may then swim away. Or they may circle and arc a pathway that intersects with your tiny treading place in the giant ocean, and see you.

Whale babies seem delightfully innocent and clumsy; there are things they don’t know yet. They squeak like little puppies and often veer right towards you, unsure of their fins and tails; this could seem threatening because these “small” whales are 2-3 tons, but they are curious and want to try you out as a playmate. Mothers, and the male escorts (who may or may not be family) float below, intervening only if they are concerned for the baby, or the baby and her mom. Once one of our group members dove to soon and the mama turned and sped her baby quickly away. Another time the escort began to move because our group had inadvertently separated mom from baby. Some encounters are acknowledgements, and even feel like reacquainting with an old friend. On one of my swims, the baby rose up to the surface and then arced around and swam towards me, then crossed right in front of me. His eyes seemed to suggest that he or she was teasing me. He and his Mama stuck around, but not too close. To be above the silhouette of dark and white (each whale has its own very unique markings), and watch the long body glide effortlessly and slowly away, with a final view of the white fluke as it drops down deep, is magic.

One time a baby rose up to the surface about 10 feet from me, and I popped up to see it there, then when I dunked under, the mama was circling around and swam right by me, looking me in the eye. Are you a worthy playmate for my child? I guess I was. They remained and floated, swam, and even the baby frolicked for over an hour. The escort, whose was just a dark shadow resting on the ocean floor, stayed right under us until they began to migrate. When he rose up, a fellow swimmer was right on top of him and his extended leg was a mere 2 feet from his massive back. Its exciting, its calming, its soothing, and its deeply moving..

Free diving is an exquisite sport, and despite my initial lack if interest and fear, I managed to get to 8 meters on my second try. And held my breath for twenty seconds. It felt completely natural to be in ocean, and as a long time Continuum teacher, I realize that of course—this is home. We are ocean . 70% water. We need to breathe, but we can learn to hold breath to return to our origins and play beneath the surface. As my comfort increased, I began to dive closer to the whales beneath the surface I held my breath for longer times. And when a snorkel filled or a mask flooded and I fell behind my group and was suddenly far from the boat and far from the group in that deep stormy ocean, I soldiered on. Three guiding thoughts: You chose to be here. You know how to swim. If you see a shark just kick it.”

Somehow, I confronted fear and feel in love with free diving and with endless hours in ocean. It was ok to be almost landless for 8 full days. I left these encounters with the sense that the whales are in charge. They know we are here; they’ve been watching us for millennia. They watched life emerge from ocean to land, as they did; then when they chose to return to the ocean, they had seen creatures move on earth. They first heard our legs in the water and then perhaps heard canoes and kayaks, sailboats, motorboats, water ski’s. They hear the sonar of large naval ships (which often damage their usual migratory and feeding patterns) so they know we are here. They are always watching. So I think those of us who arrive out of curiosity and respect, with a sincere interest in learning about and from the whales, might be welcomed. I wouldn’t want too many people in the ocean at any one time, and for now, whale swimming is a privilege. It costs a lot to fly to Tonga and stay here for a week and access a boat that can take you out each day. It’s a once on a lifetime experience for many of us, and one that merits not just the action of being in the water with these ancient ocean wisdom keepers, but also reflection.

Read about whales. Read about the whale wars and whaling industry and the sacrifices they have made as they continue to forge on and steward the oceans. Watch movies like The Whale, and Blackfish. Whales are sensitive, intelligent, compassionate, and holy. When I contemplate the state of the world, I truly hope that if our human species dies out, whales remain and perhaps return to their rule.
To watch a baby whale nuzzle against its mother is to see pure love. As their long bodies wiggle like a fish, the mama stays soft and calm, allowing her child to playfully scratch and soothe itself on her rugged skin. They show wisdom, affection, and acceptance. They allow us to be in their space.

On my last day, I hovered above a mama whale, about 10 feet. She was resting in between ocean floor and ocean surface. Her fins were slowly undulating to keep her afloat. I gazed at the eyes on each side of her head, the top of her head where her massive brain is. We knew the other was there. I told her several times that I loved her. I sounded as close as I can to a whale song and while I have no idea if my tiny sound carried to her, if she heard anything, I trust she knew I tried to outreach my voice to hers. Whales truly feel like the embodiment of love. At home in the oceans, their powerful bodies swimming unbearably long and cold journeys, they move slowly, gracefully, fluidly in their watery realms. Its like being in a waking dream and witnessing the creation of a world. Dreaming. I am beginning to believe that whales not only welcome us; they long for us to respectfully be with them, in their environment, so that they might teach us how to be in this world. They displace a lot of water just in the act of breathing, and the massive ocean they dance in is still all around. Ever changing, their gift is traversing the unknown to ensure that life goes on.
And to remind us: love is big.