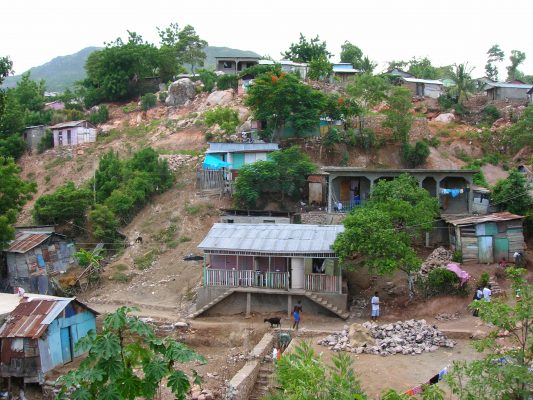 I don’t know how to begin this blog. I left my Haitian home this morning, feeling tired after 11 days of teaching stacked up onto ceremony and cultural gatherings. I felt tired and gleeful. The sun was shining (despite warnings four days ago about Tropical Storm Dorian) and Haiti, for the first time in a long time, was sparkling like a jewel. So I thought about beginning like this: Ayiti Cherie, you are sparkling again, resurrecting your former place as the “Pearl of the Antilles”.

By the time I was boarded on my plane and sitting at my computer, however, another beginning had emerged: The unexpected is to be expected. Actually, there is no unexpected in Haiti—expect anything and everything. I was upgraded to business class, and looked forward to a relaxing journey (3 flights!) home. As soon as I settled my luggage into the bin, I sat down. I suddenly felt that my seat was damp. I stood up, and sure enough, the seat was wet. So were my pants, all the way through to my underwear.

After reporting it to the crew, I went to the bathroom, and am sad to report that it smelled like urine. I reported this to the crews, and they were not surprised—a very elderly woman sat there just before me. I have seen several people pee in the middle of the aisles on fights to and from Haiti, being unaccustomed to the more formal structure of flying bathrooms, so I wasn’t surprised. But I felt gross. The airline changed my seat; all they had was an economy class seat which was much harder and smaller—that was an interesting revelation. I always knew the front cabin was more comfortable—now I know why. It’s a seriously different seat.

I did my best to clean up and dry off. Half way through the flight, I went back to the bathroom. When I returned to my seat, lunch was served. As I sat down, I once again, felt wet—on my hands, arms and sleeves. Red wine!! Everywhere! The man sitting next to me had spilled his red wine everywhere, and not said a word. He WATCHED ME sit in it, and put my hands in it. All I could do was thank him, loudly, for masking the urine smell with the odor of red wine, and get some soda water to dab out the stain.

Obviously, this could have been a very irritating situation, but I had to laugh. Wine and piss. This is very Haitian (though rum and piss might be more apropos). One becomes the other. The cycle of intake and output, nourish and eliminate, life and death. I left Haiti with the distinct impression she is in the midst of a grand resurrection, a phoenix rising from the rubble, and while things are far from perfect, there is much to hope for in this country that is too often defined by its misery and corruption indices.

The gems: the parks that were not too long ago tent cities are now brightly painted, refreshingly colorful, play-provoking sites. It’s common to see children playing on playground equipment, lovers or friends holding hands as they stroll through the parks; families enjoying being outdoors together. There are many more freshly built and paved roads, connecting not just places in Port au Prince to one another, but also other cities (Hinche, Cap Haitien) to Port au Prince, which suggest the possibility of decentralizing services and development throughout the country. Even the recently finished brand new road from Port au Prince to Cap Haitien, which was partially destroyed by Hurricane Sandy last Fall, was being rebuilt, again. This never used to happen in Haiti!

I also saw many, many billboards (the primary way to advertise performances and social events) lining the major driving routes in Port au Prince, displaying everything from galas to sales to music to theater to dance to anti-trafficking campaigns and human rights messages. The color, enthusiastic messaging and sheer number of these billboards are encouraging: they show that there are a lot of day and night-time activities going on in a city that just three years ago was shut down by a devastating, murderous earthquake, and that 6, 7 and 8 years ago was shut down by violence. When I lived there in 2004-5, we often had 6 pm curfews.

There is a fair amount of criticism, and equally, uplifted spirits, being expressed by people in Haiti, for their current President. That he had no true political “upbringing “or experience prior to his election can certainly be a point of contention; he has made some mistakes. However, what almost every Haitian friend, colleague, or acquaintance I have talked to about Martelly says about him:

HE LOVES HAITI. HE LOVES OUR COUNTRY.

And, he is teaching Haitians (especially children) to reconnect to Haiti’s long and rich history of culture, spirit, arts, and independence with pride. Students can now do school projects in Kreyol (they have a choice). There are more folkloric dance troops, and more performance spaces and nightclubs to watch them in. There is more traditional (across generations and genres) music to listen, dance and celebrate to. There are two “Kanavals” a year; not just one, as there used to be in the mid and late 1900’s ,before the awful embargo years. Much of what I see emerging under his presidency is the color and magic of Haiti’s soul.

I have written about this before: The more deeply acquainted with, and connected to, Haitians can become with their own rich artistic expression and culture (which so much of the world, unbeknownst to many Haitians, celebrates while they have learned about their own practices and artistry as shameful, primitive or sorcerous), the more Haiti can restore the strength, vibrancy and integrity that is inherent in her individual and collective history.