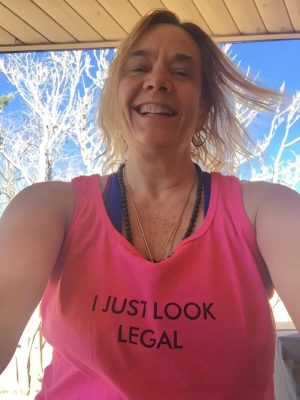 Day of gratitude. Beneath and beyond the mythical tradition of a Thanksgiving meal (see my post last night regarding the untold history of this time), I welcome today as a day of reflection and gratitude.

My reflection begins with something that happened many times on my recent trip to Sri Lanka. Many hotels, restaurants and stores in Sri Lanka have a security person stationed there, to check your bags. I noticed that in large hotels, everyone had to pass trough the airport-like machines. In smaller stores and restaurants, my Sri Lankan friends would get checked by the person whose responsibility it was to check. I was not.

So, I offered. I went up to each grocery store security guard and asked if they needed to check my bag. Mostly, they peeked in, smiling and shrugging with what appeared to me to be a bit of embarrassment. I offered: “I am happy for you to check my bag.”

Flash back to a photo I posted in April, 2016, of me wearing a pink tank top I made that says “I just look legal” (re-posted here). At the time, I had recently learned of Sergio Romo’s infamous “I Just Look Illegal” t-shirt appearance (google it), which a friend told me was partially in response to a professional athlete of color who was beaten up due to racial profiling. I cannot find that story any more, and don’t know if that was the impetus for his t-shirt. Regardless, Romo is the son of Mexican immigrants, and his t-shirt stirred a lot of speculation and reflection on his meaning for wearing it.

Sergio’s story sparked my pink t-shirt, and this relates to what I am grateful for today:
Privilege.
Grateful, and conflicted.

I created the “I Just Look Legal” t-shirt and hoped that by posting it on FB, it would encourage other dominant culture people, with privilege, to make a similar t-shirt. That did not happen, perhaps due to my ignorance of social media and how to use it. Perhaps also, because its damn hard to own up to privilege and to willingly pick up part of the burden on creating equality and inclusion for all.

Why is the burden always on people of color to prove that they are “ok?” When are those of us (predominantly white in the USA) with privilege going to step out and take some risk and name that our skin color and privilege does not automatically mean we would never do something illegal; something that breaks the law? That you might want to check our bags, too? When are we going to pick up some of the weight of racism, fear, profiling and oppression and boldly name that white, or dominant culture, doesn’t always get to be excused. That assumptions about intelligence, integrity, and ability to succeed don’t belong more to us than to anyone else. We are all equally capable of violence, ignorance, and “illegality”. Many of us have done something “wrong”, and gotten away with it, because we look “ok.”

I am grateful for the privileges I have had that have shown me this world. Made it easy for me to move freely, to stay safe, to be included. And I am conflicted that I carry that privilege because we with privilege are not all doing enough to minimize the power differential it creates. That the story of a first meal between would be colonizers and genociders, and the people native to this land, is still dominant history is proof of this. Even if that first meal was a happy occasion, the “ever after” did not go so well for Native Americans.

My Thanksgiving prayer: That everyone with power use that power to pick up a piece of the burden of equality and inclusion; carry it, wear it, and name it, out loud.